And Thus Endeth the Cole Rumors…

If the Yankees did, in fact, offer Clint Frazier, Chance Adams, and Miguel Andujar to the Pirates, Pittsburgh GM Neal Huntington didn’t stop until he could find a much worse package for Steel Town. In reality, the trade shows that GM Brian Cashman never offered the much talked about packages for Cole. It’s been said that he may have only offered Clint Frazier OR Chance Adams. The Yankees were clearly not as high on Cole as the Astros were.

I’m glad the page can finally be turned. I am in favor of adding a starting pitcher only if it upgrades the current starting rotation. After completion of the one-year contracts for all the arbitration-eligible players, the Yankees have approximately $22 million left before they hit the luxury tax threshold (which is, of course, a hard “salary cap” in the Hal Steinbrenner Universe) of $197 million. The Yankees will not use all of that money so to say that they have $22 million left to spend is a bit of a misnomer. They need to set aside $2 million in case CC Sabathia hits his bonus milestones and there’s no way that Team Hal will bring payroll (AAV) tightly against the threshold. He’ll want a buffer and of course there needs to be enough room to play at the trading deadline. Only the Yankees truly know how much money they have left to spend.

If the Yankees did sign a free agent pitcher like Yu Darvish or Alex Cobb, it is a certainty that the contract of Brett Gardner or David Robertson would be moved to make room. With the money the Yankees would have to include with Jacoby Ellsbury if they could entice him to waive his no-trade clause, I don’t think moving him would provide enough salary space for a big ticket purchase. They’d have to find a team willing to take at least half of his current salary and honestly I don’t think that team exists.

Chris Archer, we’re coming for you. With Cole out of the picture, the pitcher most likely to draw top speculation as the guy targeted for the Yankees, it is the talented 29-year-old righthander of the Tampa Bay Rays. Of course, it’s possible that we could start hearing Michael Fulmer’s name again but both men continue to carry high price tags. If he doesn’t get a viable role for the 2018 Yankees (i.e., trade of Gardner or Ellsbury to make way), Frazier would look very good in Detroit’s outfield.

Even despite the current stagnant free agent market, I don’t think either Mike Moustakas or Todd Frazier will accept a one-year “pillow” contract regardless of what happens between now and training camp. I like the left-handed bat of Moustakas but I think he’ll eventually end up with the St Louis Cardinals.

At this point, there is not really much left to do for the Yankees except make preparations to to start training camp in a month. Now that long-time coach Rob Thomson (annual organizer of training camp) is in Philadelphia, third base coach Phil Nevin and others will have to step up and deliver for new manager Aaron Boone. I am looking forward to the results of their preparation and organization as they host the members and challengers for the 2018 New York Yankees.

The MLB Network has been reviewing their top ten lists at each position, but they blew it for shortstops. The omission of Didi Gregorius is wrong. There’s no way that I’d trade Didi for half of the guys on this list: 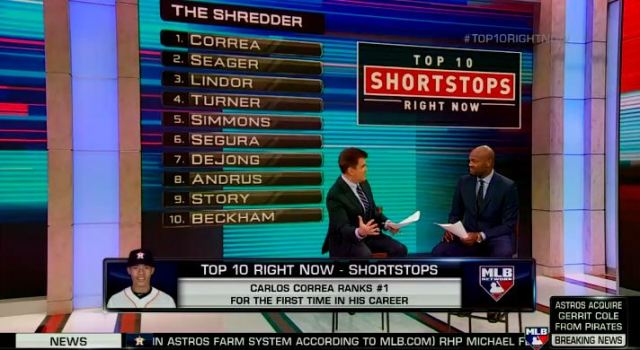 Tim Beckham over Didi is a joke. Trevor Story was struggling to hold his job last season and it’s only a matter of time until Rockies top prospect Brendan Rodgers pushes him out of the way.

That’s fine. Pitch to Didi like you think he’s an afterthought in the Yankees lineup and let’s see what happens.

Tyler Austin proposed to his long-time girlfriend, Stephanie Dana, over the weekend and she said yes. Hopefully this is a sign that 2018 is shaping up to be a fantastic year for the young Yankees first baseman/outfielder. Congrats to Tyler and Stephanie!

The Mets are really going to sign free agent first baseman Adrian Gonzalez? It makes me appreciate every day that I am a Yankees fan. Nothing like pushing a young, promising first baseman (Dominic Smith) out of the way for an aged ‘has-been’. Jon Heyman’s argument is that A-Gon only costs the minimum and there are questions about Smith’s conditioning.  Viable arguments but I am glad that A-Gon is on their team and not mine.

Life as a Minnesota Vikings fan has not been as rewarding as life as a Yankees fan, but the best Vikings team in years takes the field today against the New Orleans Saints in the NFC playoffs. The winner moves on to the NFC Championship to play the Eagles in Philadelphia. I am hopeful and optimistic that the Vikings will be the ones traveling to the City of Brotherly Love.

The Vikings will feature three active QB’s behind starter Case Keenum. Sam Bradford, who missed the majority of the season with a knee injury, was activated for today’s game. He’ll be joined by fellow QB’s Teddy Bridgewater and Kyle Sloter. With Keenum, Bradford, and Bridgewater all potential free agents after the season, I was very glad to see the Vikings waive backup TE Kyle Carter rather than Sloter to free up a spot for Bradford. Bradford was the starting QB in the season opener when the Vikings beat the Saints. My hope is that all three backups need to do no more than hold clipboards while Keenum continues his season of rejuvenation.

And as always, Go Yankees!