Dan Clark, an Orioles blogger from Australia, caused quite a stir yesterday afternoon when he tweeted Manny Machado is headed for New York. 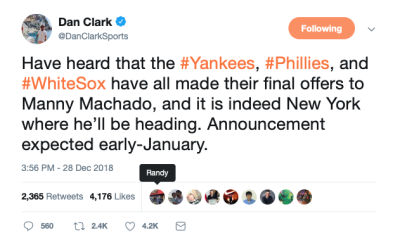 According to Clark, he trusts his source and stands behind his words. Ultimately, nobody really knows until Manny signs his name on the dotted line. He may want to be a Yankee as we’ve often heard and he may feel today the Yankees are his team but until the final decision is made and the agreement is in place, Manny is free to change his mind. I continue to hope Manny signs with the Yankees but honestly it continues to be my opinion that he’ll take the most money which will probably not be the Yankees regardless of how much he may have loved the team as a kid.  My hope is the Yankees make their final offer close enough that it causes Manny to accept slightly less to wear the Pinstripes. But if it is a wide gap, the Yankees had better enact Plan B immediately.

I feel bad for Clark. He has taken so much heat for his comments and people are attacking his credibility. In my opinion, that’s not fair. Does having “credentials” make a guy like Joel Sherman a better human being? No, I don’t think so. Clark has friendships with the Orioles and he is more connected to the inner workings of that organization than most Yankee insiders. I place some value in Clark’s message, but I recognize to blindly trust the words until proven correct is foolish. If he is right, great. I look forward to the introduction of Manny Machado at Yankee Stadium. If he is wrong, the world goes on and we wait for the development of Plan B to cover for the temporary loss of Didi Gregorius next season. I won’t think any less of Clark if he is proven wrong. He has expressed an opinion which is his right. He has the basis of sources that he trusts. We don’t know his sources but it’s not a reason to invalidate Clark’s words. I support his right to say whatever he wants about the Yankees or Orioles or any other team. He believes the words, right or wrong, and that’s all that really matters.

As for Machado, the Yankee fan base seems so divided over the young superstar. I know that he failed to deliver a World Series championship for the Los Angeles Dodgers and we all know about the infamous “Johnny Hustle” comments, but last time I checked, the Red Sox rolled over all their competition last season, not just Machado’s Dodgers. I don’t blame Machado for the Dodgers’ loss. This is a team game. He is one of the best players at his position, whether it is shortstop or third base. He makes any team better and I think if he becomes a Yankee, the fan base will rally around him. At the end of the day, he’ll only want the same thing we want, a World Series championship. We’re going to boo him for that?

In my post yesterday, I predicted Manny’s decision will come on Tuesday, January 8th.  However, that was under the assumption final offers had not been submitted. If, in fact, the Yankees, White Sox, and Phillies have submitted their best and final offers to Machado’s agent, Dan Lozano, I’ll revise my decision date to Friday, January 4th. Next week should be an eventful one. We’ll see. Either way, I am glad the Machado speculation is coming to an end.

I saw the blurb this morning in MLB Trade Rumors about the Texas Rangers and their trade of Jurickson Profar to the Oakland A’s. In the post today, Gerry Fraley, Rangers beat writer for The Dallas Morning News, is quoted as saying “The Yankees were interested in Profar as a stopgap player while Gregorius recovers but weren’t willing to give up much”. I figured the Yankees could have put together a prospect package that rivaled the one received from the A’s but this indicates the Yankees were not as sold on Profar as we thought. Fraley goes on to say Profar’s throwing problems will not be as obvious at second (he had 24 errors last season at third and shortstop) but the Yankees do not need a permanent second baseman (they already have great one) and the last thing they need is another defensively-challenged infielder. I like Profar and continue to hope he can fulfill the promise he once held as the top prospect in the game, but it sounds like the Yankees made the right decision to pass.

The Sonny Gray to the Brewers talk seems to be picking up steam again. For Sonny, I think it would be a great opportunity. The Brewers have a good, young team and it’s obviously a winning environment right now. Sonny could prosper in Milwaukee. As for a potential return, I’ve heard Corey Knebel’s name. I know 2018 was a struggle for the Brewers’ closer and it included time in the minor leagues to find himself again, but I like Knebel and I think he’d be a good addition to the bullpen. Another potential name is first baseman/outfielder Eric Thames, but man, that would really be a pronunciation conflict with Yankees hitting coach Marcus Thames. Seriously, Thames would be a good add but it would spell the end for Greg Bird and I am not sure the Yankees are ready to break that bond yet.

Bryan Van Dusen (@Bryan_TGP) posted this comment on Twitter this morning: “All this talk about Manny Machado, and I’m just hoping that Brett Gardner is not the regular left fielder this season. Although, I’m looking out for Clint Frazier, as I wouldn’t be surprised if he became the regular left fielder sometime during the season (assuming no Bryce)”. I agree with this 100%. There hasn’t been a lot of talk about Red Thunder and I know everyone wants to see if he can stay healthy, but I am really hoping that Frazier can grab a starting role through his performance. I think everyone loves Gardy and he has been a great Yankee but the truth is he is not the player he once was. He can still be a very good fourth outfielder but the team should not depend upon him in the starting outfield when there are better options. Frazier, clearly, can be the better option.

On MLB Network yesterday, one of their predictions for the new year was the Yankees’ acquisition of LHP Madison Bumgarner at the trading deadline.  That’s one I could really get into. I know there’s been a lot of talk and speculation about MadBum but everyone expects the Giants to try and get their best deal in July. This is one that I hope the Yankees are positioning themselves for, especially if MadBum stays healthy. The Giants love Bumgarner, but new President of Baseball Operations Farhan Zaidi will make a decision that is in the best interests of the Giants organization for the long run. The odds MadBum will be traded are as great as they’ve ever been. I’d love to see him playing in October again.

I am so tired of the World Series highlights that are continually replayed as the end of the year approaches. Can we turn the page already? The Red Sox are so yesterday’s news.