I am not going to lie…I am pissed.  We allowed the Boston Red Sox to celebrate on Yankee Stadium soil and that should have never happened.  The Yankees won two of three games from the 2018 AL East Champions, and I can’t find any joy because they mailed in the third game after winning the first two to give the Red Sox the win they needed to claim the division championship.  I was happy they pinned the 49th loss of the season on Boston after Wednesday’s win (to prevent any chance of the Sox matching the win total of the 1998 Yankees), but they really could have swept this series and forced Boston to ship the champagne to their next destination.

Everybody is so quick to talk about how awful the Red Sox bullpen is but in last night’s bullpen matchup, Boston had the difference-maker in Steven Wright with three innings of scoreless relief.  The Yankees helped eject Red Sox starter Eduardo Rodriguez out of the game in the fourth inning after he had thrown 100 pitches.  Red Sox reliever Heath Hembree relieved Rodriguez and was greeted by Giancarlo Stanton’s grand slam which temporarily gave the Yankees a 6-4 lead, but from there, the Yankees could only get two more hits and were unable to put any further runs on the board against Wright, Ryan Brasier, and Craig Kimbrel.  Meanwhile, the Sox teed off on Chad Green, Dellin Betances and Aroldis Chapman.  I can’t really blame Green or Betances.  They are the guys I probably would have brought in during those situations, but I think it was very foolish to bring in a rusty Aroldis Chapman with the Yankees trailing by only two runs.  The three-run homer by Mookie Betts off Chapman in the eighth inning pretty much iced the game for the Red Sox and prepared the champagne bottles for uncorking.

I disagreed with manager Aaron Boone’s decision to bring in Justus Sheffield during Wednesday night’s game too.  Sure, Top Sheff evaded a self-created bases-loaded jam to end the game, but the Yankees were playing MLB’s winningest baseball team and the psychology of the game and beating Boston is important.  If you bring anybody in when you are leading by nine runs, it should have been Chapman and not Sheffield.  I would have eased Chapman back into the fold before placing him into a high leverage situation.  I was not surprised that Betts clubbed the homer off Chappy. Just like Aaron Judge is currently only producing hard outs and missing the mistake pitches, it takes time to get back up to speed.  Baseball is not a forgiving sport.

I am still supportive of Aaron Boone despite my frustrations with his decisions over the last few days so I know I am just venting.  I would have played last night’s game to win which means that Chapman would not have made an appearance, nor would have any of the rookies currently on the staff.  After Betances, I would have lived or died with Zach Britton to the end.

What really made yesterday so disappointing was the other primary Wild Card contender, the Oakland A’s, crushed their opponent.  GM Billy Eppler’s Los Angeles Angels must have felt they were playing the Los Angeles Rams after the A’s decisive 21-3 thrashing.  The Yankees hold a slim 1 ½ game lead on the A’s after yesterday’s results, but the scary part is the Yankees now face a losing team that they seemingly cannot beat (the Baltimore Orioles), the high-flying Tampa Bay Rays, and a rematch with the Red Sox at Fenway Park for the final ten games of the regular season.  I am not saying they have it easy, but the A’s play weaker opponents.  Three games in Oakland against the disappointing Minnesota Twins, three games in Seattle against the fading Mariners, and three games in Anaheim against the team they just drubbed by 18 runs in yesterday’s game.  In my opinion, it is Advantage A’s.

A ‘one and done’ Wild Card game in Oakland. From my perspective, that’s where the Yankees stand right now with the way things are unfolding in the American League.  Well, at least CC Sabathia can catch up with friends and family in the area before he heads home to clean out his locker at Yankee Stadium for perhaps the final time.

As always, I hope the team proves me wrong.  But as I’ve said before, that’s on them, not me.  I want the Yankees to win but I am just not feeling it right now.  I am not convinced the Yankees can beat the A’s and I am certainly not convinced the team can beat the Houston Astros, Cleveland Indians or Boston Red Sox should they advance.  They certainly have the talent, but for a team that has been average at best for an extended period, they can’t just flip a switch to turn it on.  The Yankees need to make the next ten games count and carry momentum into the Wild Card game.  Otherwise, we’ll be watching the final season of Game of Thrones before the Yankees have another chance for the crown.

Hopefully the team can return to its winning ways tonight against Buck Showalter and the Baltimore Orioles.  This series represents perhaps the final time that we’ll see the former Yankees manager in the O’s dugout.  For as much as I’ve disliked Buck at times during his post-Yankees career, I am a little saddened about the way the 2018 season has treated him.  To reach 50 wins, Buck’s team needs to win six of its final ten games.  That’s a tall order for the 108-loss team, but then again, they have three games against a team they’ve fared well against.  You know that Buck would like nothing better than to beat the Yankees for his farewell song.

As the saying goes, sometimes the best trade is the one that you don’t make.  Last off-season, everybody was clamoring for the Yankees to acquire Michael Fulmer of the Detroit Tigers.  Fulmer had a disastrous 2018 season.  He was 3-12 with 4.69 ERA in 132 1/3 innings.  He gave up 128 hits and career-high 19 home runs.  Done for the season, Fulmer was diagnosed with meniscus damage in his right knee on Monday and underwent surgery yesterday.  He is still a young, controllable pitcher but unless the Yankees can get him at a severe discount, it would not be worth the investment.  If the Yankees had paid Detroit’s asking price last winter, we’d have nothing to show for it today.  Fulmer is expected to be ready for Spring Training but Detroit’s best move would be to wait for Fulmer to rebuild his trade value before considering any offers.

It’s up to CC Sabathia (7-7, 3.80 ERA) to get the Baltimore series off to the right start tonight.  He’ll be opposed by former Yankees prospect Yefry Ramirez (1-6, 5.50 ERA).  This is a winnable game.  Boone, make the right decisions.  Gary Sanchez, hold the door…hold the door!  Luke Voit, just keep on doing what you are doing, chest hair and all.  Let’s do this. 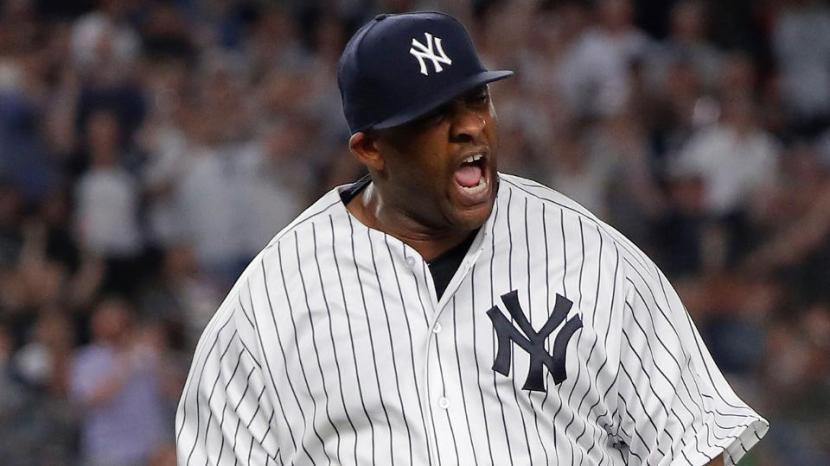