Two young Bombers collected their first Major League hits to help power Masahiro Tanaka and the Yankees to the victory over the Chicago White Sox.  Throw in another Aaron Judge home run and it was a good night at the office (even if it was a slightly wet and windy one).

When I saw the lineup card, I was a little concerned when I saw that two “fresh” rookies would be starting.  But on this night, they were exactly what the doctor ordered.  The Yankees jumped out to an early 3-0 lead.  Brett Gardner walked to open the game.  Following outs by Aaron Judge and Gary Sanchez and a passed ball that moved Gardy to second, Didi Gregorius reached first safely on a throwing error by White Sox shortstop Tim Anderson.  Gardy scored on the play.  Chase Headley and Austin Romine both walked to load the bases.  Miguel Andujar, a new arrival from Scranton/Wilkes-Barre, stepped to the plate and chopped a single to center which scored Gregorius and Headley.

Tanaka escaped a bases loaded jam in the 2nd but he wasn’t so lucky in the 5th.  After the White Sox opened the inning by loading the bases with two hits and a walk, former Yankee Melky Cabrera lined a single to left, scoring two runs.  Fortunately, Tanaka was able to get out of the inning without any further damage.  3-2, Yankees.

The Yankees wasted no time in re-establishing a multiple run lead.  In the top of the 6th, against Sox reliever Jake Petricka, Austin Romine doubled with one out.  After Miguel Andujar hit a grounder for the second out, Tyler Wade followed with his first Major League hit, a fly ball that dropped in for a double to score Romine.  Ronald Torreyes then laced a sharp double to right, scoring Wade.  5-2, Yankees.  White Sox manager Rick Renteria came out to talk to Petricka and was thrown out when he began jarring with the Home Plate Umpire Hunter Wendelstedt.  The Yankees two-out hit parade continued as Brett Gardner singled to center to score Torreyes.  Aaron Judge came up and lined “a bullet” to left for his 27th home run of the season.  8-2, Yanks.

Tanaka (6-7) finished his day by striking out the side in the bottom of the 6th.  I really didn’t know what to expect out of Tanaka for this start.  I didn’t know if last week’s stellar performance against Yu Darvish and the Texas Rangers was an aberration or a sign that Tanaka was back on track.  Fortunately, it appears the turbulence may be a thing of the past…or at least I hope so.  Tanaka’s final line was very solid.  6 IP, 6 H, 2 ER, 2 BB, and 5 SO.  He threw 101 pitches, lowered his season ERA to 5.56 and most importantly, did not give up any home runs.

It started to rain in the 7th inning.  It got a little tense in the bottom of the inning when Tyler Wade, playing left field, was charged with an error.  A fly ball that normally would have been destined for center field drifted toward left with the aid of the wind.  Brett Gardner, playing center field, was moving with the ball and attempted to catch it but so was the left-fielder Wade.  Their gloves collided causing the ball to bounce out of Gardy’s glove.  The White Sox put a second runner on base on another wind-aided fly ball that Ronald Torreyes missed.  There was also a fly in foul territory that normally would have been caught if not for the wind.  Despite a subsequent walk that loaded the bases, Chad Green was able to strike out Todd Frazier to end the threat.  Whew!  I was very worried that the wind was going to help the White Sox get back in the game.  I guess there’s a reason they call it the Windy City.

In the top of the 9th, Didi Gregorius hit a one-out two-run homer to increase the lead to 10-2.    In a bit of deja vu from earlier in the game, both Chase Headley and Austin Romine walked in front of Miguel Andujar.  Like the first inning, Andujar didn’t miss the opportunity.  He lined a double to center to score (again) both Headley and Romine.  Nice debut performance by Andujar with 4 RBI’s on the night.  He finished 3-for-4 with a stolen base.  He was probably left wondering what’s so hard about baseball at this level.

Chicago’s Adam Engel homered off Tyler Webb in the bottom of the 9th to make it 12-3 but then Webb settled down and retired the next three batters (two by strikeout).  The Yankees win!

Then it was off to bed for the Baby Bombers…

After so many close games and disappointing losses, it was nice to have a blowout.  The Yankees (42-34) moved back into a first place tie in the AL East with the win.  The Boston Red Sox lost to the Minnesota Twins, 4-1.  The Tampa Bay Rays lost to the Pittsburgh Pirates, 6-2, so they are three games back.

Former Yankees top prospect Jesus Montero, 27, is looking for a new team.  He was released on Tuesday by the Triple A Norfolk Tides, the top farm team for the Baltimore Orioles.  Montero recently completed a 50-game suspension for a banned substance and was only batting .143 in 49 at-bats with 14 strikeouts for the Tide. After Montero’s trade to the Seattle Mariners in the 2012 deal that brought Michael Pineda to New York, he has spent time in the Toronto Blue Jays’ organization in addition to his latest Minors stint with the O’s.  I guess that means the Red Sox or the Rays are on tap next.  It’s been a hard road for the player once billed to be the next greatest catcher for the Yankees.  Now he’s struggling to just stay in the game at first base or DH.  Sad story for the guy who was supposed to be Gary Sanchez before Gary Sanchez was.

News started breaking early on Wednesday about the promotion of third base prospect Miguel Andujar to the Yankees.  Andujar had just been promoted from Double A Trenton to Triple A Scranton on June 19th.  In 67 games for the Thunder, Andujar had a slash line of .312/.342/.494 with 7 HR’s and 52 RBI’s.  Out of 79 total hits, 23 went for doubles.  He also had a team-high 10 errors.  In 7 games for the RailRiders, Andujar was hitting .308 with 1 HR and 2 RBI’s (8-for-26). It is a small sample size but he only committed one error at Triple A.  He hit well during Spring Training but his fielding was questionable. Nevertheless, he is known as an above-average defender.  He now has a golden opportunity to out-perform an over-priced, 33-year-old veteran.  Yesterday’s debut, even if he was at DH and not third, was a great start.

To make room for Andujar, the Yankees placed DH Matt Holliday (viral infection) on the 10-Day DL retroactive to June 25th.  Holliday has been battling the symptoms of the allergic reaction he first encountered in Oakland.  He’ll return to New York for further tests.  We wish Matt the best and hope to see him back on the  field in the near future.

We thought the Chris Carter Experiment was over, but alas, it might not be.  The Yankees have announced that Carter, previously designated for assignment, has cleared waivers and accepted an outright assignment to Triple A. He now represents the next option should the Yankees decide it is necessary to place Tyler Austin on the disabled list (hamstring).  So, just when you thought it was safe to watch a Yankees game again… 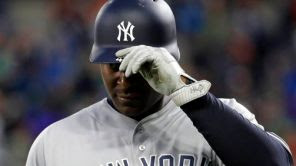 Happy Thursday!  One final game in Chicago before the getaway to Houston, Texas.  Let’s Go Yankees!