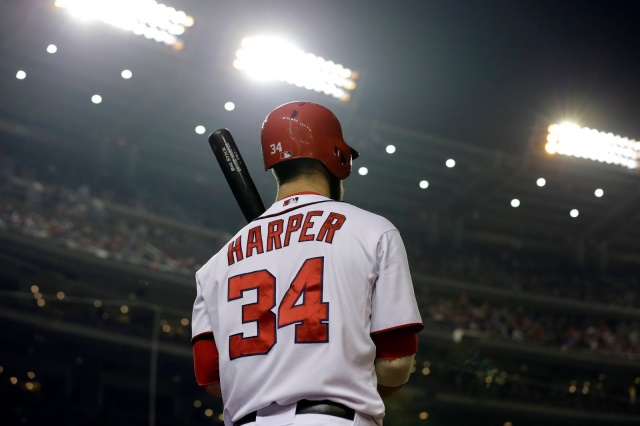 How much are these stats worth?

New speculation is placing the value of Bryce Harper’s next contract closer to $500 million than the previously thought $400 million.  With an argument that Harper is twice the player Giancarlo Stanton is, is he worth twice the contract (or $650 million)?  Harper is going to bring new meaning the term “franchise player”.  How much did George Steinbrenner pay for the Yankees back in 1973?  It’s a rhetorical question but the answer is $10 million (with 60% in borrowed funds).  Granted, the Yankees are now worth more than $3.7 billion but it’s still phenomenal to think how much money Harper is going to get.

At face value and with a strong right-fielder already in place, I have to say that despite Harper’s greatness, Manny Machado is looking better and better every day.  As luck would have it, we happen to need a third baseman.  I am just not so sure about the one more year of Chase Headley part…

As a Yankees fan, I am not a supporter of the Toronto Blue Jays but their players continue to provide more reasons to dislike them.  The bat flip by Joey Bats after a home run against the Atlanta Braves on Wednesday was ridiculous.  I had no problem with Braves catcher Tyler Flowers pointing at Bautista with an inside-fastball sign on a pitch selection the next night.  Braves pitcher Julio Teheran promptly drilled one into Bautista’s thigh.  But the homophobic comments that Blue Jays outfielder Kevin Pillar directed at Braves reliever Jason Motte were totally unacceptable.  The anti-gay slur resulted in a two-game suspension for Pillar.  I hope the Atlanta Braves fans realize that the Blue Jays are not representative of all AL East teams.

Tyler Austin has joined High-A Tampa to begin his rehab assignment.  The Yankees will have some decisions to make when he finishes the rehab assignment.  With Greg Bird ready to begin his rehab assignment next week, it increases the likelihood that Austin heads to Scranton/Wilkes-Barre.  But the RailRiders have a good recent addition at first already.  Mike Ford, called up last week from AA-Trenton, has three homers in six games and eight RBI’s.  He is 8-for-26 (.308).  The RailRiders are also loaded in the outfield with Clint Frazier, Dustin Fowler, Mason Williams, and Mark Payton.  If it were up to me, I’d think hard about moving/cutting Chris Carter and slotting Austin in as backup first baseman/outfielder. 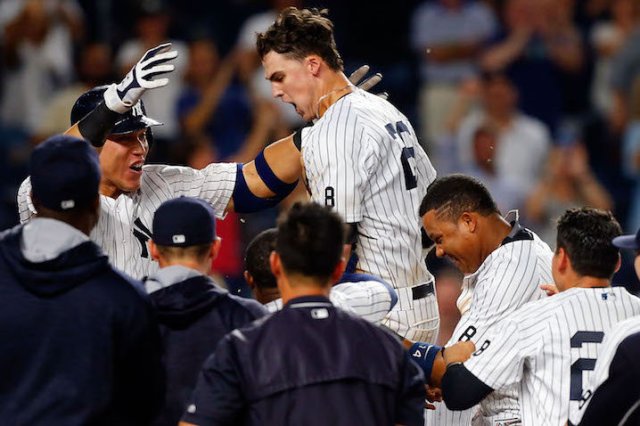 Alright, I’ll join the bandwagon.  My awareness of White was more acute during his age 30+ seasons, but he was a trusted, reliable and a bit under-appreciated member of the Yankees and those back-to-back World Championships in the late 70’s.  For a team that was overflowing with superstars, White simply did his job when called on.  With no disrespect to Joe Torre who retired #6, I still think of White when I see the number.  Not many players stay with one team their entire career, but White was one of them with fifteen years in Pinstripes.  The other outfielders, Reggie Jackson and Mickey “Mick the Quick” Rivers, were more flamboyant but White always seemed to come up big whenever you needed him.  I agree, he gave his baseball life to the Yankees and it is only right that they give Roy his day at Yankee Stadium.

The Yankees have a new manager!

Okay, it was just one game.  Bench coach Rob Thomson was manager of the New York Yankees on Friday night so that Joe Girardi, could attend his daughter’s high school graduation.  Congrats to Joe Girardi for showing (and the Steinbrenner Family for allowing) that family does truly matter.

A lost night in St. Petersburg…

Rob Thomson, you’re fired (just kidding…well, maybe a little serious).  One-game manager Rob Thomson, filling in for Joe Girardi, failed in his one attempt to steer the ship.  Back to the bench for you, Rob.  The Yankees were undone by a pitcher who couldn’t make it more than five innings, thereby placing a heavier burden on the bullpen, a bad defensive play at third, and Thomson’s decision to leave his best hitters on the bench in a three-up, three-down ninth inning that led to the 5-4 loss to the Tampa Bay Rays.

Luis Severino only gave up one run, a first inning double by Logan Morrison that scored Evan Longoria, and struck out seven Rays.  But he gave up five hits and three walks with 89 pitches (only 59 for strikes) and was gone by the sixth inning.

After the Rays had tied the game in the bottom of the seventh inning at 2-2 with runners at second and third and two outs, the Yankees could have avoided further damage.  With third baseman Ronald Torreyes thinking about the runner advancing to home plate, a hopper by Rickie Weeks Jr went under his glove into left field, scoring the two runners on base.  Weeks Jr was credited with a double in a very liberal decision as it probably should have been an error by Toe.

Matt Holliday did his part in trying to bring the Yankees back.  After a walk to Brett Gardner and a pop-out by Jacoby Ellsbury to open the eighth, Holliday homered to right to tie the game at 4.  The Rays came right back in the bottom of the inning when Tyler Clippard (0-2) gave up a run-scoring single by Evan Longoria after putting two men on base through walks.  Longoria has gotten off to a slow start this season but against the Yankees, he always looks All-World.  A 4-for-5 night, with two runs scored and the RBI, ensured the Yankees were playing from behind.

Still, the Yankees could have rallied again in the ninth inning, but Thomson kept both Gary Sanchez and Aaron Hicks on the bench so we’ll never know.  Sanchez and Hicks, both of whom had the night off, could only watch as Chris Carter struck out (surprise, surprise) and Austin Romine grounded out to end the game.

The loss dropped the Yankees to 24-15.  With Baltimore’s 5-3 win over the Toronto Blue Jays in extra innings, the O’s closed the gap in the AL East to just a half-game again.  The Boston Red Sox lost so I guess the evening wasn’t a complete disappointment.

Welcome back, Joe Girardi.  I will be glad to have you back in the saddle for today’s game.  I hope the graduation ceremony was a tremendous success for Serena and the family, but it will be great to have you making the lineup decisions today.

Have a great Saturday!  Let’s win the games we should win and not give them away.