Where did the excitement of the new season go?…

The season began with so much optimism.  The Yankees had the best Spring of any team in Major League Baseball (24-9-1) which was their best Grapefruit League performance since the 2009 World Championship year.

The Yankees may not be World Series contenders this year, but I expected more than a 1-3 start through four games.  With 157 games to go, there’s still much baseball to be played.  But it’s important to see the team gel with a winning mindset sooner rather than later.  It’s not feasible or possible to win every game, but the attitude for expecting to win should be there.  With a downward spiral, it’s too easy to get caught up in the losses and the negativity spreads like wildfire.

My concern this month is the schedule.  It is not an easy path in April.  With two more games to go in Baltimore, the Yankees will play a total of eleven games this month against the AL rival Orioles, Boston Red Sox and Tampa Bay Rays.  The series against the Red Sox is at Fenway Park which isn’t exactly an inviting place for the Yankees (or their fans).  The Yankees also play the St Louis Cardinals in inter-league play.  Mike Matheny’s squad always comes to play.  The Yankees really need to get on top of this, and pull out a few stretches of two or three consecutive wins.

Despite Friday’s loss to the Orioles, it was good to see Gary Sanchez connect for his first home run on the season.  It is unrealistic to expect 20 home runs in 50 games again, but just getting the first one out of the way helps the mental approach to each at-bat. 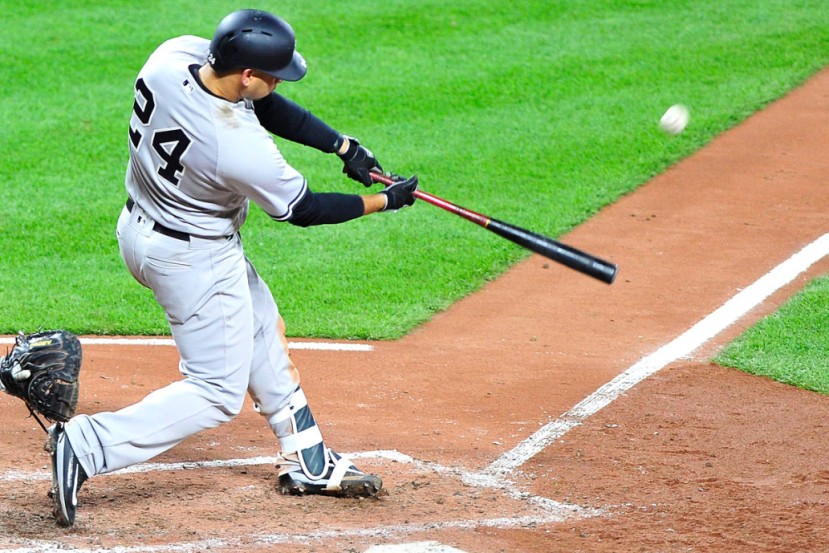 Right now, the young trio of Sanchez, Aaron Judge and Greg Bird are all hitting below the Mendoza Line.  Sanchez has the best batting average of the three (.167).  Judge stands at .133, while Bird, with one hit in 16 at-bats, is a pathetic .063.  You’d expect Judge to be the team’s strikeout leader (given Chris Carter is not an every day starter) but he trails Bird by two.  It’s sad when the team’s best hitter is Chase Headley (7-for-15).

Collectively, as a team, the Yankees need to start hitting.  The formula of a few hitters making contact with the majority of the bats being silent does not work.  A few more pitching performances like the one CC Sabathia delivered in the second game of the season would also be nice.  With no fifth starter needed until April 16th, the Yankees have cycled once through the rotation.  Sabathia gave the only defined quality start.  Tanaka’s start may have been the worst of his Yankees career.  As we proceed into the second run through the rotation, much better results are expected and needed.

Losing is like negativity.  It is very infectious.  If the Yankees can start running out a few stretches of consecutive wins, they can change the attitudes and mindset of the team (and its fans).

The Yankees received bad news regarding top pitching prospect James Kaprielian this week.  He has been shut down and placed on the Minor League DL.  He underwent a MRI on his pitching elbow (which include dye-contrast).  The results have been shared with the Yankees team physician and Kaprielian will now head to Los Angeles to meet with noted Tommy John surgeon Neal S. ElAttrache, M.D.  Dr. ElAttrache is the team physician for both the Los Angeles Dodgers and the NFL’s Los Angeles Rams.  He also is on the Board of Directors for the famed Kerlan-Jobe Orthopedic Clinic which was co-founded by Dr. Frank Jobe, who pioneered Tommy John surgery.

If Kaprielian needs Tommy John surgery, it’s very possible that we won’t see him again until 2019.  With CC Sabathia’s contract up at the end of the year, I had hoped that Kaprielian would be in position to compete for his rotation spot next Spring.  Now, his career is in doubt.  This is starting to feel like the Andrew Brackman situation.  A pitcher with so much promise who was never able to overcome arm injuries, leading to his eventual release and exit from baseball.

With Kaprielian sidelined, the focus will shift to young pitching prospects like Jordan Montgomery, Chance Adams, and Justus Sheffield to lead the way for future rotation help.

I remain hopeful that Kaprielian receives the best possible medical opinion from Dr ElAttrache and if Tommy John surgery is the only answer, I wish him much success on the long journey to recovery and hope that the Major League dream is still within his grasp.

He said, she said…

This seems to be the week of fake news.  Two separate reports were leaked, only to be quickly shot down by the Yankees.  News reports spread quickly that Yankees prospect Clint Frazier had asked the Yankees to un-retire Mickey Mantle’s number.  Both the team and the player quickly denied the reports and Frazier stated that he was only concerned with the front of the jersey and not the back of it.  The story obviously got its start from somewhere, whether it was words take out of context or spoken in jest, but I do not believe that Frazier made the request.

The other report was that the Yankees have no intention of re-signing starting pitcher Masahiro Tanaka should he decide to exercise the opt-out clause in his contract at the end of the year.  Managing General Partner Hal Steinbrenner stated that no discussions have taken place.  The Yankees would be foolish not to consider all their options, and re-signing Tanaka to a new longer term deal does represent risk.  He’ll be 29 in November and the slight tear in his Ulnar Collateral Ligament (UCL) is not going to improve without eventual surgery.

Both stories sound like writers fishing for stories.  Finding a shred of truth it and then embellishing it for the sake of sensationalism.

The Yankees have made their share of bad trades over the years, but one that doesn’t get much recognition is the trade of infielder Eduardo Nunez to the Minnesota Twins three years ago yesterday.  Nunez was subsequently traded to San Francisco and is now their starting third baseman (hitting .400, 8-for-20 so far this season).  Meanwhile, the prospect that the Yankees received from the Twins for Nunez (23-year-old lefty Miguel Sulbaran), currently with AA Trenton, has been suspended for 25 games due to a drug policy violation.

While it has not been reported what Sulbaran did to lead to the suspension, it’s safe to say that the Yankees would not make this trade if they had a chance to do it over again.

In all my years as a baseball fan, I’ve never attended an Opening Day game.  That changed yesterday when I saw the Colorado Rockies open Coors Field for the 2017 season against their division rival, the Los Angeles Dodgers.  Although I am a Yankees fan, the Dodgers are my favorite National League team so I have to admit that I was wearing some Dodger blue yesterday.

But the day belonged to the Rockies and their young starting pitcher, Kyle Freeland, who made his Major League debut.  Freeland, who was born and raised in Denver, delivered a very solid performance while picking up his first Major League victory.  He went 6 innings, giving up only 4 hits and 1 run.  He walked 2 and struck out 6.  He was never on the ropes and seemed in command for the duration of the game.  The Rockies won, 2-1, in a pitcher’s duel (with Hyun-Jin Ryu) which is not something you ever expect to see at Coors Field.  The game’s only home run was delivered by backup catcher Dustin Garneau.  The Dodgers starting lineup was missing two regulars (Corey Seager and Adrian Gonzalez) although both made their way into the game in later innings.  But it wasn’t enough, and Freeland departed with the win.

I remember seeing Jake Peavy make his Major League debut in San Diego years ago (against the Yankees) and it always stuck with me throughout Peavy’s career that I was there at the start.  I guess I can now say that about Freeland too.  Time will tell if he is as successful as Peavy.

Despite pulling for the Dodgers, it was a fun day in the Mile High city.  The weather was uncharacteristically warm for this time of year (mid 70’s) and the stadium was energized by its fans.  I expected to see more Dodger Blue but Purple was clearly the color of the day.