The right to be pessimistic…

Anybody who has read my blog knows that I have been very pessimistic about the 2013 Yankees.  I didn’t feel right about the team coming out of training camp as the Yankees did nothing to upgrade the talent on the team and then when the season started, it became a comedy watching all of the regulars, well, for the most part, end with significant time on the disabled list.

A slight bit of optimism started to slip into my thinking last week when the Yankees started inching closer to the second wild card slot.  But that was quickly dashed by the weekend sweep at the hands of the AL East leading Boston Red Sox.  The Yankees weren’t just defeated in the series, they felt like a minor league team against giants.  It “felt” as though it was impossible for the Yankees to take charge of a game and even when they did hold a lead, it seemed very fragile and in retrospect, it was.

I was reading Joel Sherman’s recent column about the bleak prospect for 2014 and I have to agree.  CC Sabathia has shown nothing to lead one to believe that he’ll restore his status as the team’s ace.  It is very possible that we are watching the final pinstripe days for Hiroki Kuroda who has been the team’s best pitcher.  Ivan Nova, after a brief successful run, has shown he is nothing more than a roller-coaster.  Phil Hughes is auditioning for his job elsewhere next season and not doing a very good job.  I do not see any scenario that brings Andy Pettitte back for another season.  I am sure that this one has been a grind and at his age, that’s enough to pack his bags and head back home to the Lone Star State for the final time.  He’ll be a spring training regular as an instructor, I am sure, but as for Yankee Stadium starts, the end is near.  I honestly have no clue what season’s rotation will look like other than CC anchoring the bottom end.

As much as I want to see the return of Robinson Cano, I don’t want the Yankees to break the bank.  It’s that type of mentality that led them to their current predicament.  But I recognize when Hal and Hank Steinbrenner make comments that there’s a limit to what they’ll spend (even if it is the right thing to do), it will psychologically send a message to Cano that maybe they don’t want him as bad as the crosstown Mets or the ‘spend-foolishly’ Los Angeles Angels.  The outfield is a disaster with the cast of characters that can call themselves the “Forty-Something” Club.  Granted, Brett Gardner isn’t 40, but he’s also proven that he is DL-prone.  That’s not an affliction that gets better with age.  We’ll most likely see the return of Vernon Wells for no other reason than he won’t cost the Yankees anything toward the salary cap.  Derek Jeter is a Hall of Famer, but as a 40-year-old shortstop playing on a bad ankle, he’s not a guy that you want to see on the field for 140 or 150 games.  Mark Teixeira is on the express train to insignificance.  Chris Stewart has done a decent job as the replacement for Russell Martin, but he’s a backup on almost any other club.

A look at the Yankees’ farm system does not show anyone that is ready to be handed a first class ticket to the Bronx.  This is definitely an organization in a state of flux, and I am not convinced that it is one that GM Brian Cashman can survive.  I think the Yankees will bring back Joe Girardi (there’s not really anyone else that stands out as a surefire upgrade) and someone has to pay the price for Hal Steinbrenner’s frugalness.  Cashman’s mantra was building the farm system, but as it stands today, it is a system filled with overhyped prospects with the best talent years from maturing.

How do the Yankees overhaul their aging, overpaid and underperforming roster?  Boston’s GM Ben Cherington gets great credit for his salary purge last year that led to his team being on the fast track to the World Series.  Unfortunately, I do not see any other team willing to accept the Yankees’ excess baggage.  Are we facing a 1980’s drought? I hope not, but then again, I am not seeing anything that would instill confidence.  I hope the team’s off-season meetings are about how to improve the team and not to avoid exceeding the 2014 salary cap.  Another 2013-like year, and this is going to be a very difficult hole to dig out of.  I would not expect the Yankees to compete again until after the contracts of Alex Rodriguez, Mark Teixeira, Derek Jeter, CC Sabathia, and the other older vets are distant memories.

Meanwhile, my favorite NFL team, the Minnesota Vikings, is 0-2.  2013 is not playing out to be a very good sports year for me.  I need help.  Hey, San Jose Sharks, can you do something to lift my spirits?…

The end is near for the Yankees but sadly that also means….

The end of the legendary career of my personal favorite Yankee, Mariano Rivera.  He’s been my favorite since he was zooming fastballs in the 8th inning prior to the entrance of closer John Wetteland.  Mo has been the epitome of the ideal baseball player.  When I think of all the Yankee greats, there is some sadness that I never got to see them play, like the Iron Horse, Lou Gehrig.  But in Mariano Rivera, I saw a pitcher that my grandchildren will be talking about.  I’ve been very proud of his career and accomplishments and even in those moments of failure, there was never sadness because you knew that Mo gave it his all.  It’s been a pleasure to be a fan during his reign and his career will always be one that I’ll be so thankful and happy for.   I thought his words in the Fenway Park dugout were sincere, simple and so-Mo.  He is and has been the best… 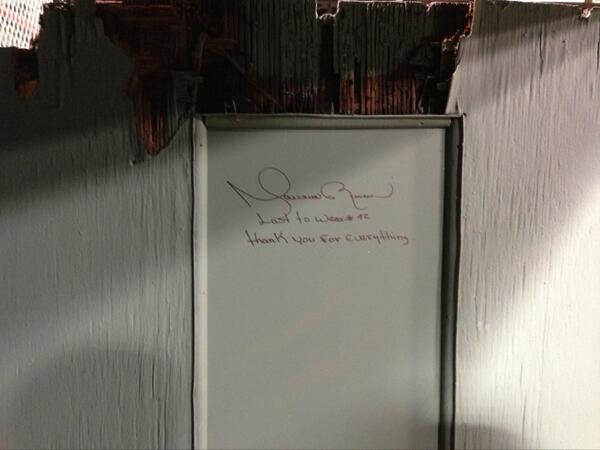